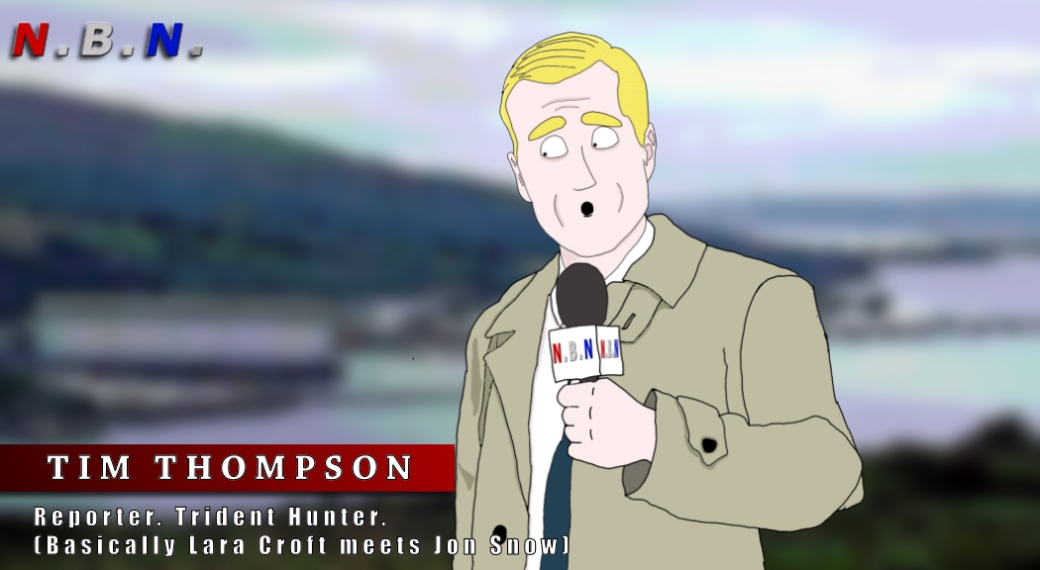 Pictured – Tim, doing what he does best.

Disclaimer Two: This piece of ranty polemic takes aim at all sides in this stupid fucking debate and if, by the end of it, you think this doesn’t apply to you then you’re a fucking idiot.

The tone that permeates the slurry of articles about how giving both votes to the SNP will raise Cthulu from his inter-dimensional prison (or something), is one of smug condescension and holier-than-thou superiority (or, more accurately leftier-than-thou). That’s how it comes across, and not just to hardline SNP voters but to folk like me who don’t have a sodding clue who the fuck they’re going to vote for in May. I’d rather vote for myself because you’re all doing my bloody nut in.

People get pissed at being patronised and then we get another cavalcade of articles about how, after people have criticised the content of the articles and the veracity of trying to game the voting system, that this somehow constitutes intolerance and an ‘unhealthy’ approach to Scottish politics. Haud the fucking bus. Isn’t the fact that people are replying with critiques a clear fucking example that there is debate? Just because people take issue with what you’re saying doesn’t mean they’re trying to fucking silence you (and they couldn’t, even if they wanted to – see Part One.)

If you’re a fringe party looking for SNP voters to give you their second vote then why in the name of utter fuck are you acting as if they’re all a bunch of backwater hillbillies who aren’t as smart as you are? That’s a sure-fire way to win support. Piss off the people whose votes you’re looking for, instead of giving them reasons to vote for you.

I’ve tried to wrap my head around the Holyrood voting system multiple times and I barely understand the fucking thing. But I know what doesn’t work and that’s tactical voting. We saw how successful that campaign was during the GE under FPTP. Do we really need to get the Tactical Voting Wheel out again? Really?

If the election was held over a few days, with time between the constituency and list votes, then maybe, just fucking maybe I could see how tactical voting would work. You would know the outcome of the constituency votes so you would have a clearer understanding of the impact of your list vote. That isn’t the case though and telling people their SNP vote is wasted is a down-right fucking lie. Seriously? That’s your election strategy? To offer a misconception of the voting system for your own political ends? Hardly the stuff of ‘progressive Scotland’ is it?

And then if you dare take issue with this concept you’re added to the ‘SNP voters not tolerating dissent’ group. A tactic used, rather ironically, to avoid discussion and debate and to silence critics. But hey, when the fuck has self-awareness been Scotland’s strong suit?

Rise activists then cry ‘so much for doing politics differently’ with the same condescending sneer that Stephen Daisley utters ‘so much for your civic nationalism’ whenever you happen to refer to a reporter from England reporting on English matters as an ‘English reporter’. Hold the front pages.

The loudest voices during the indyref that I heard talking about doing politics differently were from the likes of RIC, the SSP and unaligned voices. Many of those same voices now use the phrase as a stick to beat SNP voters. “Not as progressive as you thought you were, eh?” they mutter, smug grins on their faces.

If the SNP uttered that phrase then I never believed it. I see them for what they are and they are, by far, not as left as I’d like them to be. But as a grown-up I’m able to support a thing while still being able to take issue with some of the stuff it does. I can’t stand BBC news for example but by Christ some of their entertainment output is fantastic. I have issues with SNP policy as do many people who vote SNP (and those who still intend to vote SNP in May). Land reform (can we seriously get on that?), fracking, the fact we still have the regressive council tax. They aren’t perfect by a long fucking shot. Yet they have a solid track record in government despite their shortcomings.

But if your own party – whose radicalism you claim Scotland desperately needs – can’t stand up to people on social media disagreeing with you, then what fucking chance does it have? And writing article after article about how Scotland’s pro-indy movement is heading for Ragnorak because people on social media are disagreeing? Fuck the fuck off. That’s an utter cop-out and looking for an excuse to blame others for your party’s shortcomings, or an excuse to duck criticism.

Judging by the polls the message of the Greens and Rise is not connecting. Instead of berating SNP voters for not voting how you think they should (deja-fucking-vu anyone?), why aren’t you focusing on how you can connect with voters and get across a message that engages, not alienates, the support you need?

I sense some SNP voters nodding along at this, muttering approval. You’re not off the fucking hook. Some of you are just as bad as the other lot. If you go around social media like some pit-bull on smack calling out every fucking person who dares to criticise the SNP as ‘MI5 plants’, ‘secret unionists’ or whatever the fuck else, then you’re a complete tosspot. The same way that No voters were turned off completely by this low-level form of debate, so are pro-indy folk. Just like Rise won’t win votes by hectoring the fucking electorate for not voting the way they want (or daring to criticise them) you won’t win people over with that shite. “Give the power to the SNP!” “Indy first, everything else later!” It’s shit like that which causes chasms and rifts. Fucking stop it. If you can’t state you’re case in a civilised, non-fucking-zoomerish way then don’t expect people to treat you with any respect.

However, the SNP are riding high in the polls and are thus in a fantastic place to take a few critiques. The difference between mud-slinging and smears from the right-wing press and criticism from pro-indy voices is that the latter want the same bloody thing you want – a better Scotland. They’re allies not enemies. And while you’re free to critique their criticisms (although some raise their hackles when you dare talk back, which is unhealthy), keep the zoomery to a fucking minimum, okay? Civilised debate engages people. Calling Lesley Riddoch or Neil Mackay unionist plants (after all the fucking work they’ve done for the indy cause) is just down-right disrespectful.

Commonspace and Bella Caledonia – despite my criticisms – aren’t secret plots by Westminster to scupper the case for independence. They aren’t all secretly Tory voters looking to split the vote. Commonspace hosted many of my articles last year – often as sweary as this – and most of you enjoyed them. They do offer a range of views (even if it doesn’t come across that way at times like this). Take issue with them, criticise them, but by fucking Christ don’t be a cunt about it.

You’re not being forced to read them, and for all this current bullshit a cracking article, report or think-piece will come along that will remind you why we fucking need a varied bunch of voices in this movement (Robin McAlpine’s latest article on CommonSpace being a case in point.)

And to our brave alternative-media – if you are being reasonably criticised for something (by ordinary folk, not nutjobs – you know, do the block thing), don’t fucking dare dismiss those who’re asking questions as ‘SNP loons’, ‘fanatics’ or ‘acolytes’. The fallout from that is that is pisses reasonable folk off and widens the chasm between them and alternative media platforms. I read Wings Over Scotland because he tears apart the guff from the mainstream press better than anyone. I’m not a fawning acolyte and I resent the fucking implication. Rev Stu Campbell can be an absolute and utter prick at times and I respect folk who don’t want anything to do with him. I recognise that. I disagreed with his big block list as it felt like an ego trip, while at the same time recognising blocking the more vocal and abusive unionists could bring about some zen to your timeline. What’s that? Nuanced views? In Scotland? Must be the end of days.

There’s an election coming up. People will be trying to get votes for their chosen party. They’re allowed to do that without being hung out to fucking dry or hounded by idiots (again, that block button though.) Equally, just because the voters aren’t doing what you want them to doesn’t give you the right to tarnish them with a big brush and then not expect blow back. You reap what you fucking sow. This isn’t god-damned rocket science after all.

And finally, nobody outside of the Twitter bubble gives a flying fuck about any of this stuff. They’re not going to make up their mind because you tell them an SNP voter swore on Twitter one time. This is a tiny storm in a tiny tea cup. If you’re worried about a lack of debate, a lack of ideas, a lack of progressive thinking then fucking do something about it other than insinuating that SNP voters are a stupid cult (again, see the similarities?).

Set up interviews between candidates, vlog about it, blog it about it, make videos, take the piss out of everything. Put on debates in town halls between the parties and get people – ordinary people – engaged. Seriously, I’ll turn up and shout and swear at everyone in the audience so that you look absolutely enlightened by comparison. I’ll do that because I am generous as fuck.

You want grown-up debate stop acting like children. All of you.

I had a really good chat with a close No-voting friend of mine the other day. You know what happened? We didn’t kill each other. We talked, we agreed on some things, we disagreed on others but at the end of the day we’re still friends. That’s because when you discuss stuff in real life, most folk aren’t cunts about and can have reasoned debate with someone they disagree with.

I’m thinking SNP first and Green as my second vote in May. I haven’t made up my mind yet. But you know what’ll put me off? Parties telling me how stupid I am. I’m a self-doubting arsehole, I doubt everything I do. Don’t dare think you got a better handle on my self-criticism than I do. ( I also don’t base my voting intention on what the fuck G.A Ponsonby says. I don’t read his stuff. Sorry George.)

And if anyone has a problem with any of this, I could not give a flying fuck.

(I love you all really. Also, to quell rumours, John McTernan is not my father. Angela Haggerty is not my sister. And I will not be bringing balance to the Force.)